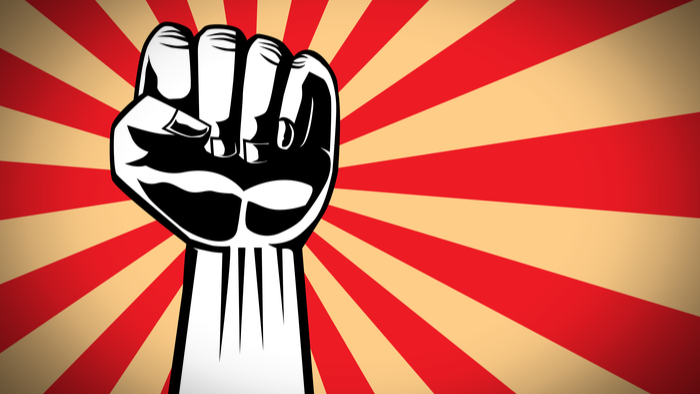 Art is not the first thing that is associated with activism, but its value in social justice movements, revolutions, uprisings,  and in any other social change, is priceless. Perhaps the most obvious example is propaganda: compelling images blending and bending the truth with lies in just the right manner so the lines are blurred and all we see is what they want us to see. Its charm is its repeatability, over and over we can be bombarded with a message on every wall, pole, website, and magazine so that it imprints in our brain forever. Take Mao’s bright god-like depiction on countless posters, or “Grandpa Lenin” holding children and promising people “Peace, Land, and Bread.” Not to mention the Office of War Information, created by Franklin D. Roosevelt in order to create and spread propaganda across the nation in support of World War II.

This demonstrates that art has in fact been hugely involved and influential in some of the most major events in the history of mankind. However, these examples do render art to be sinister- full of dark powers that blind us from reality. I believe that it does not have to be, and should not be. But The Monarch Project uses art for the exact same reason: its power to tell stories unlike anything else. Divisive times like ours are full of interpretations and regurgitation of information that is designed to draw deep and dark lines between people. We are flooded with sound bites, entire crises and histories are stuffed into a fifteen-second video splattered across the media. We have forgotten to think for ourselves and have lost any slivers of our attention span, craving quick and effortless understanding and action. This does not leave enough room for nuance and detail. For multi-layered problems and multiple perspectives, it can be tragic. One story, easily understood and spread, comes to represent an entire population of people. This is especially convenient if one is trying to demonize a group, and use one intimidating narrative that deems all individuals in that group criminals, aliens, rapists, and dangers to America. This is what the actions and rhetoric used by the current administration have and continue to create with regard to the immigration crisis.

It would be naive of me to say that “art is above it all” or that it is the remedy to this problem, but if used correctly, it can change perceptions, optics, and narratives by providing perspective in a nonjudgemental, non-accusatory, and open manner. Its simplicity and beauty can even become almost disarming. It allows everyone, regardless of their preconceived notions, beliefs, and backgrounds to better understand others and their stories. Of course, there is no guarantee as to who will truly be changed or moved by artwork, that is part of the very nature of art after all, however it most certainly is more effective than repeating the same heated arguments over and over. This ability to connect and reach out is vital to the success of any movement, especially to one as polarizing and controversial as the immigrants’ rights movement. So, we have placed art as the root of our project, using its beautiful powers to use to redefine conversations about immigrants by reminding everyone of that at the root of the debate, the political games, and ICE raids, are humans.

Thus, art and activism can go hand in hand, and when they do, innovative and powerful projects like The Monarch Project are born, with the potential to create real and beautiful change in the world.