In order to measure a system as large and multi-faceted as the American healthcare system, it takes a multitude of indicators asking essentially the same question: in this area, are we failing or are we succeeding? Maternal mortality rate, or the rate of women dying in childbirth or from pregnancy-related causes, is an example of one such indicator. It’s also an example of a question where the answer is clear that not only are we failing, but also, that our failure is only getting worse. In order to address this problem in its entirety, we must first evaluate it, both for white women and also for the women of color who are disproportionately affected by it. Then we will examine the system-wide pitfalls that have become the causes for maternal mortalities, and finally see what it takes to rebuild the system to achieve its end success: benefitting and saving the lives of mothers of all races. 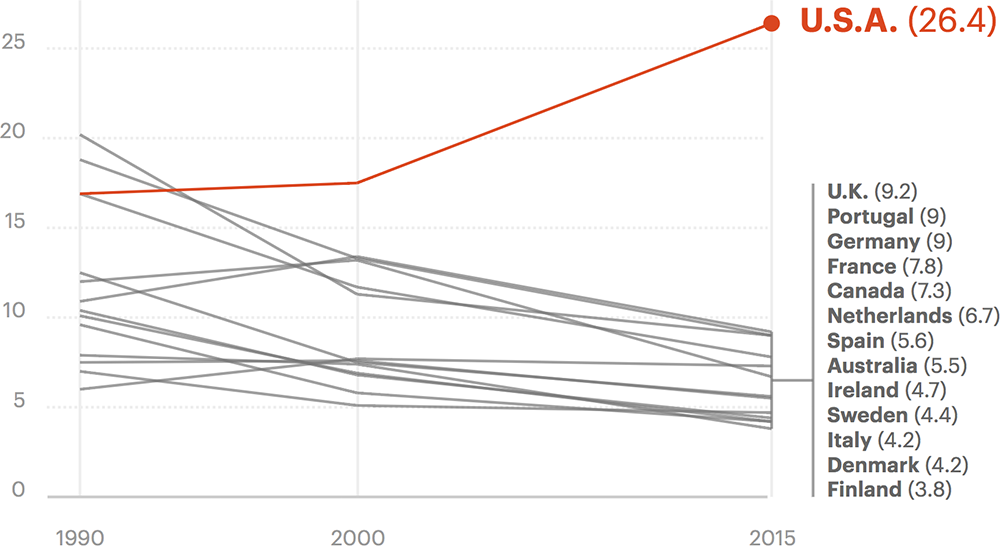 But are these rates the same for women of all races? The same statistics from the CDC’s National Vital Statistics System found that “the maternal death rate for black women was more than double that of white women: 37.1 deaths per 100,000 live births compared to 14.7.” These statistics prove that this isn’t just a health crisis; it’s also one of the widest racial disparities in the United States. According to the CDC, “a black woman is 22 percent more likely to die from heart disease than a white woman, 71 percent more likely to perish from cervical cancer, but 243 percent more likely to die from pregnancy- or childbirth-related causes” (Martin, ProPublica).

But why is this? Why is infant mortality the lowest it’s been in fifty years, and maternal mortality rate the highest? And why is it so much worse for women of color? The answer is as complicated and multifaceted as the American healthcare system itself.

First, there’s an unfortunate lack of understanding of the indicators for common pregnancy related complications. While infant death is on the steady decline due to nationwide narrowed, specific care, maternal mortality is on the up: “in the last decade or so, at least 20 hospitals have established multidisciplinary fetal care centers for babies at high risk for a variety of problems. So far, only one hospital in the U.S. — NewYork-Presbyterian/Columbia — has a similar program for high-risk moms-to-be” (Martin, NPR). And the lack of these programs have lasting effects; researchers at the California Maternal Quality Care Collaborative, who spent years studying preeclampsia, a very common complication in maternal mortality, found that “despite triggers that clearly indicated a serious deterioration in the patient’s condition, health care providers failed to recognize and respond to these signs in a timely manner, leading to delays in diagnosis and treatment.” (Martin, NPR)

But complications like preeclampsia are not widely known due to the second issue with maternal mortality rate in the US: lack of reporting. The statistics mentioned before from the CDC’s National Vital Statistics System are the first since 2007, and are still yet purported to be majorly conservative. The system for keeping track is left to a single checkbox on the death certificate, and even then, it’s handled by states who didn’t adopt the checkbox all at once. 2018 was the first year that all states reported and required a comparable check box. In England, where preeclampsia deaths are less than one a year, “maternal deaths are regarded as systems failures. A national committee of experts scrutinizes every death of a woman from pregnancy or childbirth complications, collecting medical records and assessments from caregivers, conducting rigorous analyses of the data, and publishing reports that help set policy for hospitals throughout the country” (Martin, NPR). In the US, this is settled on a state basis, if at all.

The third reason is perhaps the most problematic – and human – of them all. It is also the most deadly for women of color: implicit bias. According to the American Bar Association, “there is little reason to believe that physicians have not been exposed to the negative narratives about racial minorities that circulate in society—discourses that become the stuff of unconscious negative attitudes about racial groups.” So much so that “providers are less likely to deliver effective treatments to people of color when compared to their white counterparts—even after controlling for characteristics like class, health behaviors, comorbidities, and access to health insurance and health care services.” (American Bar Association) Serena Williams, world famous tennis player, winner of 23 Grand Slam singles titles, and black woman, dealt with this firsthand with the birth of her daughter Alexis in 2017. The day after giving birth, she noticed a peculiar shortness of breath. Due to her known history of blood clots, she requested a CT scan with contrast and blood thinner right away. However, the nurse “thought her pain medicine might be making her confused…‘I was like, a Doppler? I told you, I need a CT scan and a heparin drip’…The ultrasound revealed nothing, so they sent her for the CT, and sure enough, several small blood clots had settled in her lungs” (Haskell). For Black, Latino, and Indigenous women, these incidents aren’t as rare as they should be, and often with fatal consequences.

So where do we go from here? The CDC Foundation of Maternal Mortality Data used data from four states to find more than 20 “critical factors” that contributed to pregnancy-related deaths. According to this, “the average maternal death had 3.7 critical factors.” It would be foolish to put blame on any one of these problems as the sole cause for such a high maternal mortality rate in America. Instead, it’s imperative we attack these issues across all fronts. Approaching maternal mortality as the systematic health crisis that it is might open doors and opportunities for better research, identification, and diagnosis of common fatal pregnancy related complications. Comprehensive and accurate reporting with thorough investigations will make it easier to recognize the common factors of maternal mortality and diminish them. And finally, attacking the personal and systematic implicit biases in our entire health care system, such as “policies that make public health insurance unavailable to undocumented immigrants as well as documented immigrants who have been in the country for less than five years” will fully equip our systems to serve, protect, and save women of all races. (American Bar Association)

In a time when women’s reproductive health is on the ballot year after year, it’s important to recognize our goals. If it is true that we are actually concerned about saving human lives, then it is important that we redirect our attention to the crisis: admitting to American mothers that we are failing them, and admitting to ourselves that it’s time to do better. Then, doing better.